Evelyn Luettich Horne of Estero – who was born on Mound Key in 1922 and has-been the Koreshan Unity’s “Girl Friday” since 1940 – is living history says Fort Myers Beach author and historian Rolfe Schell.

Horne says life’s greatest gift to her has been the wonderful memories she has of special people and places.

She said her childhood memories include things such as her chats with Thomas Edison every Sunday at her Estero home, a shiny new dime she received as a Christmas gift from Henry Ford at a holiday program in Fort Myers, mouth-watering Koreshan fish frys on Fort Myers Beach and eating delicious biscuits with one of the area’s most famous pioneers and best cooks, Grandma Johnson of Mound Key.

Her later memories, she said, are just as special – learning to bake in the Koreshans’ bakery, serving dinner to Marjorie Stoneman Douglas in 1945 in the communal dining room, meeting John Pennekamp during his visit to the utopian settlement, talking with Leonard Bernstein at the unity’s Rising Tide Cottage on Fort Myers Beach, writing a column called “Around Estero” for the Fort Myers News-Press for 15 years and studying horticulture and c9Qking with the last Koreshan – Hedwig Michel

Horne said she talked with Schell, author of “1000 Years on Mound Key,” when he lectured on the history of the key at the Koreshan Library-Museum in Estero recently. “He told me I was living history,” she said.

Schell’s book, which discusses the ancient Calusa Indians’ habitation of the key as well as the Spanish explorers, pirates and pioneer settlers who lived there, contains an old plat that shows the island acreage homesteaded by Horne’s grandparents – Antonio and Mary Fernandez and Carl and Rose Luettich.

Antonio Fernandez, an emissary from a Portuguese church, came to the island in 1889 with his wife and three daughters to provide religious guidance to fellow settlers, but ended up becoming a fisherman in order to survive.

Horne said her grandfather was a member of the second group of Koreshans who came to Estero in 1894 from Chicago. She said soon after his arrival at the settlement, he moved to Mound Key with his wife and son, Charles, to became the fisherman for the pioneer community.

“My father, Charles, also a fisherman, married Dora Fernandez, Antonio’s daughter, in 1913 and left the Koreshan family,” Horne said. She said they bought a 40-foot houseboat and docked it on the south side of Mound Key.

“My dad and an archeaologist, Dr. Rasmussen, made one of the most unusual archeological finds on Mound Key in the early 1920s – a skeleton of a Calusa Indian,” Horne said. “The skeleton, which was found four-feet down in the key’s 40-foot-tall Calusa Indian shell mound, was sent to the Smithsonian.”

Horne said she was born Aug. l1, l922, aboard the houseboat. She said her two sisters, Henrietta Luettich Davenport and Mary Luettich Carter, were also born on the houseboat several years before her.

“My sisters were educated at Damkohler’s School on Mound Key,” she said. “The tiny wooden schoolhouse opened about 1918 and closed in 1925. All that’s left of it now is a pile of rubble.”

Horne said her family moved to a house in Estero when she was 3 because her brother, Charles Jr., was about to be born. “My father became the fishing guide for the Estero Inn, which burned long ago, during the winter season and also pursued his interest in plants,” she said. “When I was 10, Thomas Edison began coming to our home every Sunday afternoon to talk with my father about botany. We had a banyan tree that was a large as the one. at the Edison Home.”

She said she remembers Edison’s beautiful white hair. “And, he was so warm and friendly,” she said. “He held my hand when he talked to me.”

“I have a lot of very fond memories of Mound Key,” she said. “Those were fantastic summers. Living on Mound Key, with the settlers, was just like being part of one big family. We all looked out for each other. I learned how to swim fish and boat there and fell in love with the outdoors.”

Horne, who has two large greenhouses at her Estero home, said she developed her life-long interest in botany from her Mound Key summers. “Things really grew there,” she said. “The settlers planted many rare fruit trees. We took nature walks on the island all the time. I learned about the plants, animals, shells and birds. And, we also found Indian glass, pottery, shell tools and beads. It was a fascinating place to grow up.”

Horne said her father had to bring drums of drinking water from the settlement down the river on his 20-foot fishing boat to Mound Key because there was no water source on the tiny island, She said the water came from the settlement’s artesian wells, “We had to let the water sit over night so the sulfur would settle to the bottom and it didn’t smell so bad,” she said

Swarms of mosquitoes were another problem. ”We always had a smudge pot burning at the front door of the houseboat and old fishing nets were burned at night to provide smoke to repel the mosquito swarms,” she said.

Another less pleasant memory, she said, was the sinking of her grandfather’s sloop, the Ada. “My, grandfather had to catch all the fish for the settlement family, which included 200 people,” she said. “One night he was trying to bring the sloop up the Estero River loaded with 3,000 huge Florida clams and it sank because of the heavy load.”

She said her grandfather would bring back 300 to 400 pounds offish every night to the Estero settlement. “The bell at Bamboo Landing would be rung when his boat approached about 4 a.m. and everyone would rush down with butcher knives and pans to clean the fish,” she said.

Horne said her grandfather fried beautiful, big, black mullet for the ladies of Koreshan during fish frys at his fish camp at Big Carlos Pass on the south end of Fort Myers Beach, “That was long before Estero Bay became polluted,” she said. “The cooking also began on Mound Key.

She said as a child she knew one of the area’s most famous pioneers and best cooks Grandma Johnson. Grandma’s husband, Frank Johnson, was the first modern settler to homestead Mound Key in 1891.

“I used to sit in Grandma Johnson’s kitchen window and watch her bake her famous biscuits,’ Horne said. “She was a darling pioneer lady who loved all us kids and was always ready to feed visitors a fantastic dinner. She was one of the sweetest, kindest people I’ve ever known.”

Horne recalled that the Johnson’s home was built atop the key’s highest mound fantastic and had a view of Estero Bay.

Grandma Johnson, who was .called one of the “most worthy and interesting of Lee County’s pioneers” in a 1906 edition of the Koreshans “The America Eagle” newspaper, now rests in a tiny cemetery on Spring Creek Road. “After I graduated from Fort Myers High School in June of 1940, Allen Andrews, the editor of ‘The American Eagle came to my house and asked me to help with the Koreshan Solar Festival,” Horne said. “I’ve been working for the unity ever since.  My husband, George, has been the unity’s maintenance man for 40 years.

After the Solar Festival, Horne said she went to work at the settlement’s general store and also helped out in the communal dining room.

“Arthur Moore, who came over from England, was the store keeper,” she said. “About 1948, the River View Inn was opened. My mother was the cook and I helped wherever l was needed.”

Horne said she also helped out at the unity’s nursery when potting needed to be done and guided the 10 a.m. botanical garden tours.

Horne said she was close friends with 50 Koreshans and has written detailed personal histories on 30 of them. “I helped care for the last five Koreshans during their final years,” she said. The last one, Hedwig Michel, died in 1932 at the age of 90. I was so impressed by them. They were such hard working, good, loving, giving people. It was the least

I could do to repay them. I got such an education there. Those 50 people and their children gave me my greatest memories. The family reunions and festivals were unforgettable.”

She said one Koreshan lady, Bertie Boomer, inspired her to study painting. “I took public and private lessons for about 10 years and taught 20 children for two years during the Estero Methodist Church’s summer program,” she said. “I even had a showing of my paintings at the 1974 Lunar Festival.

Horne said her hobbies today are cooking and gardening. “For many years I made all the jellies and chutneys that were sold in the Koreshan dining room,” she said. “The mango chutney was well known. All the garden clubs wanted to-take some home.”

She also writes a cooking column, “What’s Cooking?” – for the 83-year-old” American Eagle” and works five days a week at the Koreshan Unity Foundation’s Pioneer Educational Library-Museum on Corkscrew Road in Estero.

The Koreshan Unity Foundation, Inc. is a not-for-profit corporation dedicated to preserving and publicizing the history of the Koreshans and their one-or-a-kind utopian community.

“It is a pleasure to come to work.” 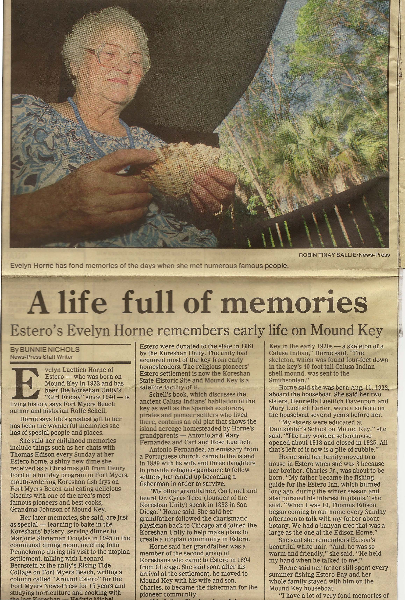