The first Art Festival in Estero was held by the Koreshans in 1905 when they opened their newly built Art Hall, complete with a stage capable of seating their 28-piece orchestra and served as a location where they could have concerts, plays, and religious services for their 250 residents. Nearby homesteaders and neighbors also attended their concerts and plays.

Douglas Arthur Teed, son of Dr. Teed, the Koreshan leader, who was already a well known painter in Europe as well as the United States, was invited to attend. As artists do, he brought his paintings with him hoping to sell them, which he did.

Douglas painted his first painting at age 10, and was adopted by a wealthy woman who sponsored him and went with him to Europe to study art. Douglas sold one of his paintings to King Humbert of Italy, and sold a few in England and other European countries. His paintings are still very collectable. The Arnot Art Museum in New York did an exhibition of his paintings in 1982. They showed more than 80 of his paintings, including some that were borrowed from the Koreshan State Historic Site.

The Koreshans attracted some very outstanding people in the arts. We have pictures of them in elaborate Shakespearean costumes performing plays.

Before the Art Hall was built, they performed at Bamboo Landing by the Estero River with the audience sitting in their boats. The Koreshans had several boats, some more than 50 feet long, as boats were the only practical means of travel to Fort Myers or to the world outside of Estero. There were no roads! Koreshan artists were Moses Weaver, who painted “The New Jerusalem,” the envisioned capital for the Koreshans where millions of people would live here in Estero! Is this happening right now in Estero? Paul Sargent, a collectable artist and son of the Koreshan John Sargent, painted beautiful landscapes. Bertie Boomer, daughter of Berthaldine Boomer, who was “Matrona” to the Koreshans, did watercolors. (It was the mother’s $5,000 that brought the Koreshans to Estero and bought their first boat.) Edith Campbell did invaluable pencil sketches of the buildings and became a talented pianist and music teacher.

In reading the biography of Douglas Arthur Teed, I read that he had a 27-room home on the banks of the headwaters of the Susquehanna River where he entertained international guests, friends of his from all over the world. He painted some of the walls with murals. In my visits to Pennsylvania, I was never in the right place to investigate if his residence is still in existence.

I have only recently discovered another form of art practiced by the Koreshans. They had three two-story buildings on the east side of what is now U.S. 41. One building was their publishing house where they printed their monthly publication, The Flaming Sword, and later, the weekly publication called The American Eagle.

The second building was their boat building where they built boats, and the third was called their “concrete house.” It wasn’t until this past year while visiting my daughter in her 1845 Greek revival home in Sparta, Ga., that I discovered a text book on concrete pottery written in the late 1800s.

In that book, I saw the lion heads (now at the state park entrance) and remembered the stone fountains and urns in the park — the same as in this book! I also had noted in some of the 19th-century homes I had visited in Sparta, the elaborate concrete work done around their chandeliers on their 13-foot ceilings. That was what the Koreshans were doing in their “concrete house!”

Currently, Art Hall is closed for repairs, but when it does reopen, I hope we can resume the Sunday afternoon musical concerts on their wonderful 1845 Steinway Concert Grand Piano. The paintings of Douglas Arthur Teed and the Koreshan artists will be back on the walls for public viewing and we can again enjoy art and music in this historic place. The Koreshans produced classical theater as well as musical concerts. 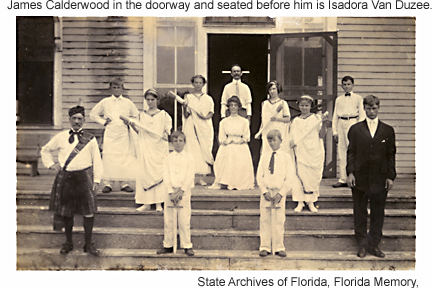 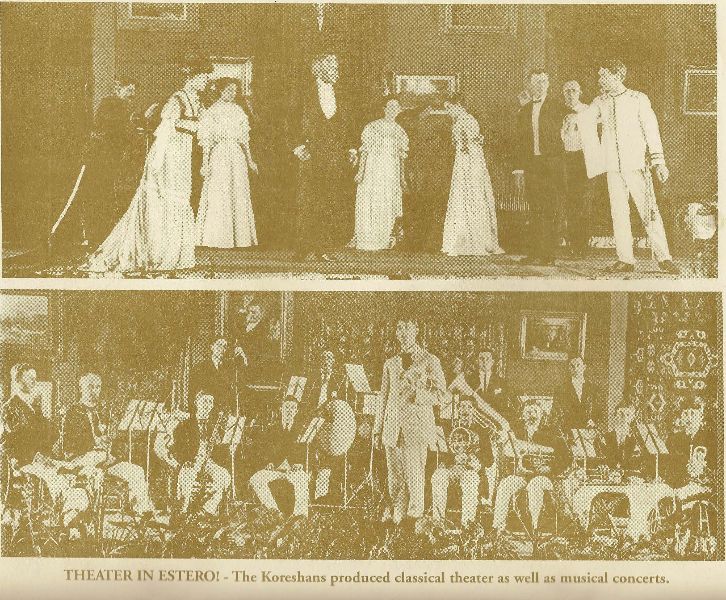 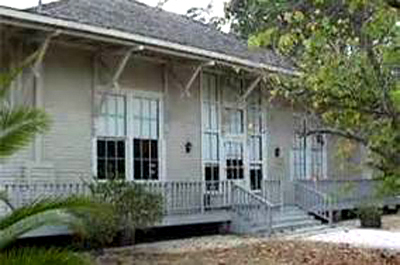