Alma Hill Trebell of Estero was a woman of contrasts.  “She was quite a Southern lady, quite genteel,” said Kay McCullers, who visited Trebell almost daily at the nursing home where she lived.

But she could drive a tractor and water fruit trees with a barrel. She was a very quiet, self-contained person. There are not many ladies like that anymore.”

Funeral services for Trebell, 92, one of the earliest residents of Estero, will be at 2 p.m. today at the Chapel of Light at Fort Myers Memorial Gardens.

Besides being a woman of contrasts, “she was also a little bit ahead of her time,” said Trebell’s great-niece, Dawn Ellis Engh of North Fort Myers. “She was able to do things in a man’s world.”

This included running a business office for her husband, Raymond Trebell, who grew up at the Koreshan Unity communal colony in Estero.

She graduated from Fort Myers High school in 1929 and married Raymond Trebell, who knew her father through his Ford Business, in 1930, McCullers said.

The couple settled in Estero.

The Trebells lived in a house on the Estero River known as the Campbell house, named for Raymond’s grandmother, Jennie Campbell.

Their post office box in Estero was No. 6, Engh said. “It pretty much was built around her and Raymond.”

The Trebells had land that stretched from Broadway to Sandy Lane and from U.S. 41 to the Estero River, Engh said. They had groves in which they grew oranges and leeche nuts.

But the main business was Trebell’s Garage, in the tin building now used as a thrift store by the Methodist Church at the corner of Lord’s Way and U.S. 41 [that building is now gone]

While Raymond worked on vehicles, Alma did everything else, including ordering parts and delivering to the farms, McCullers said.

Near the garage, Raymond’s mother Edith Trebell, operated the Tropical Jelly Factory on U.S. 41 for many years. Alma Trebell also was instrumental in starting the Estero Garden Club, McCullers said, she was an excellent seamstress and made many of her own clothes.

“She was very quiet and yet she was witty,” said Evelyn Horne, another of Estero’s first residents who knew Trebell well. “She liked a good joke, a good laugh and a smile.”

McCullers still calls Trebell “Miss Alma” “One thing, Miss Alma always wished she lived closer to Miami.” Trebell thought the dress shops were better there, McCullers said. “Raymond told her always that if she lived long enough, Miami would come to her. And it did,” she said.

Alma Trebell was a longtime member of the Koreshan Unity Foundation board of directors. The entity is now called the College of Life Foundation Inc,.

The Campbell home where the Trebells lived was later purchased by Jo Bigelow, the last president of the Koreshan Unity Foundation. Bigelow sold the land and home before she died to Charles Dauray, chief executive officer of the College of Life Foundation Inc. 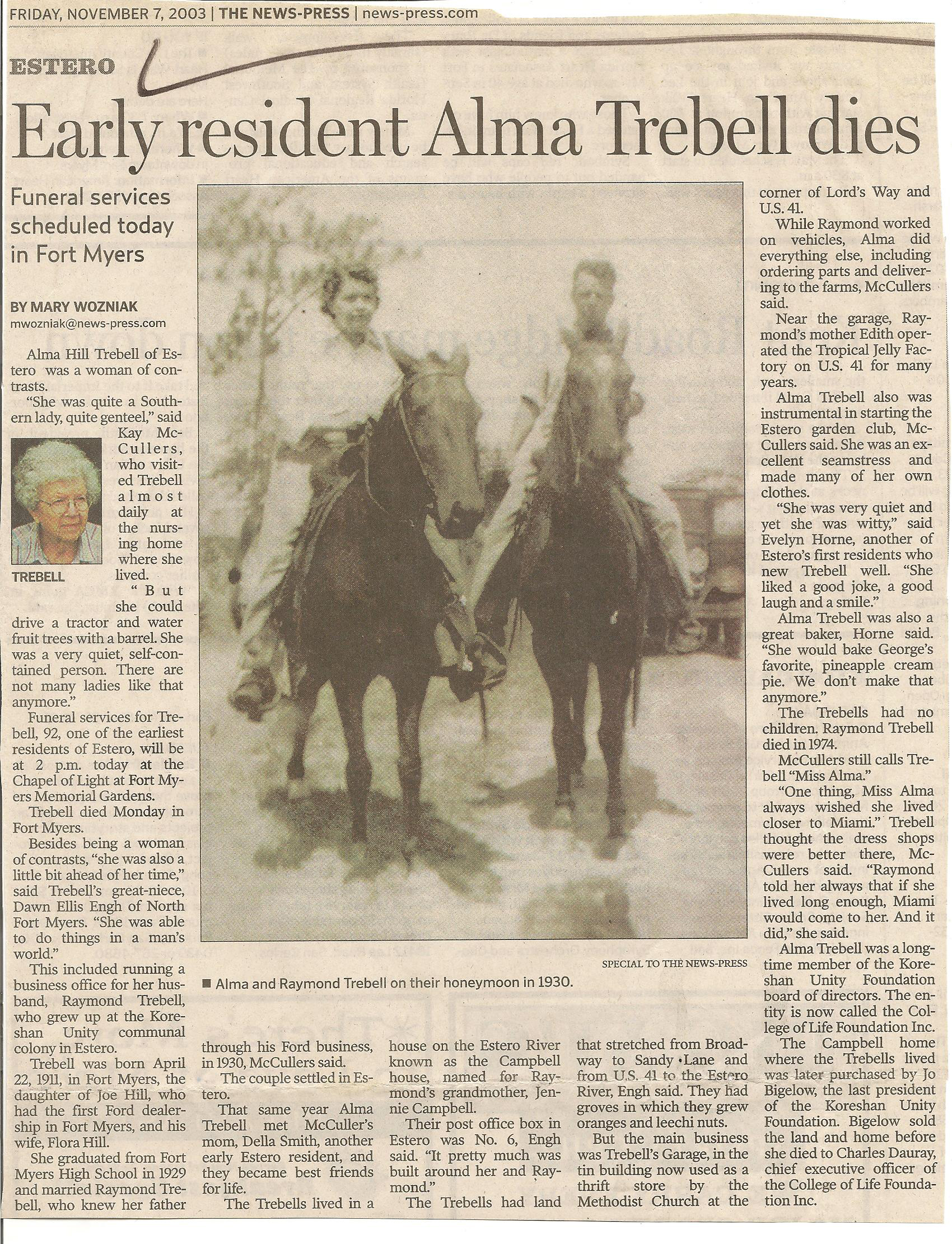