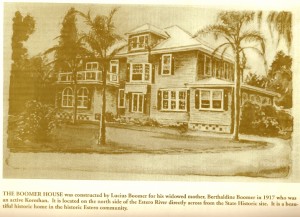 The Boomer house, built in 1917, has ties to the Koreshan society of the early 1900s. Nola Boomer is leading limited tours of the estate as a fundraiser for the Estero Historical Society.
Members of the Estero Historical Society and other guests are touring the historical Boomer house (or Mirasol, as it’s long been referred to by the family). Since it remains a private residence and cannot be seen from the highway, few have viewed the Boomer house up close. Nola Boomer has long guarded the privacy of the house, but agreed to give tours as a fundraiser for the historical society.

ESTERO — A handful of history buffs are getting a glimpse of a rarely seen Estero treasure this month.

Members of the Estero Historical Society and other guests are touring the historical Boomer house (or Mirasol, as it’s long been referred to by the family).

“This is a very special event,” says Jean Pryal of the historical society. “People have been trying for years to get into the house.”

The storied home, located off U.S. 41 in Estero, was built in 1917 for Berthaldine Boomer, the widowed mother of Waldorf-Astoria Hotel president Lucius Boomer. Berthaldine Boomer was an original member of Koreshan Unity, the utopian cult that settled in Estero in the late 1800s. 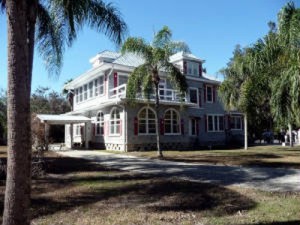 Until recently, the Boomer estate was solely owned by George Boomer, the grandson of Berthaldine; George died in 1999. His widow, Nola Boomer, sold the property to the county and state in 2004 with the agreement that Nola could live out her days at the house and the property’s environmental integrity would be preserved.

Since it remains a private residence and cannot be seen from the highway, few have viewed the Boomer house up close. Nola Boomer has long guarded the privacy of the house, but agreed to give tours as a fundraiser for the historical society.

For a $15 donation, guests are treated to a tour led by Nola and her maintenance handyman, Eric Wilson. Reservations quickly filled up for last week’s and next week’s tour. No other tours are scheduled.

Proceeds will go toward restoration of the Estero Historical Society’s headquarters, which is housed in two of the group’s own century-old buildings at Estero Community Park.

The Boomer estate, with its two-and-half story house, sits off a long, narrow driveway coming from U.S. 41. It was constructed by Koreshan carpenters. The front of the Shingle-style home faces the Estero River, the only place from which the public can typically see the house.

It’s furnished with all sorts of antique treasures, including an upright piano with genuine ivory keys. Its first tuning is marked as 1897. Much of the furniture has been in the house for decades. There are original paintings of Estero landscapes by Bertie Boomer, Berthaldine’s niece, and portraits of Boomer forefathers. Other odd furnishings come from the travels of Jorgine Boomer, George’s mother. 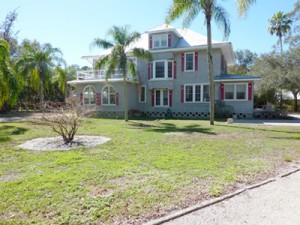 The tour is delivered like a well-scripted History Channel documentary. Eric Wilson offers his expertise on construction and renovations to the house, while Nola delivers charming stories and sharp-tongued commentary on rooms and furnishings with her hard-to-place aristocratic dialect (she was born in South Africa).

She points to two floral vases sitting in the homes ornate living room. They were bought from one of Jorgine’s European trips.

“I’ve never seen two uglier vases in my life,” Nola Boomer says dryly, “which is why they’re displayed prominently.”
Two iron-framed beds sit in a second story bedroom. Wilson calls them collectively “one of the two heaviest things in the house.”

She points to the classical-style nudes wrought on the head- and footboards.

As cool and witty as she is on the tour, Nola Boomer admitted to actually being nervous before giving the tour.
“Nola is more of a private person,” Jean Pryal explains.

It was Pryal who was ultimately able to convince her to open the house for the tours by harping on its benefit to the historical society.

Waiting for guests to arrive on Wednesday, Nola takes a delicate drag off a cigarette in her 93-year-old home. “It’s like I’ve heard tennis players say, ‘If you are not a little nervous, you’re not going to win.’”

Judging from the rapt attention and continuous chuckles from the guests, Nola’s tour was a winner.

“I was totally delighted by the tour,” said Eileen Galvin, a historical society member who took the tour on Wednesday. “It was like a step back in history.”

Galvin has lived in Estero for 20 years and this was her first chance to see the house.

“I have been aware of the house for a number of years,” she said, but admitted the tour even exceeded her expectations. “I didn’t realize we have a home like that in Estero.”

It was an opportunity that might not come again for quite some time.